Terrific German Food for You

The Finest German Food Options Around

It can be incredibly satisfying to eat food that's delectable. If you're lucky enough to be familiar with food items from the European nation of Germany, then you know just how delectable they can be. That's why you don't have to throw a tantrum if you're unable to catch a flight to Deutschland to check out all of its finest restaurants and bakeries. German Food Box is a highly regarded Florida business that can satisfy all of your desires that relate to German treats. It doesn't matter if you're interested in savory or sweet offerings. It's fine if you're interested in a little bit of both as well. If you head to German Food Box, you can sign up right away for a monthly food subscription box. What exactly does this entail? It entails the German Food Box team sending you six to eight tantalizingly yummy food products from Germany, pure and simple. If you want to take care of your German food fondness without having to set foot outside of your home in the United States, then all you have to do is get a subscription through our online shop.

We prudently pick the greatest German food options around for our dear subscribers. If you're all about meaty and hearty tastes, then you'll cherish our choices. If you're all about sweet and scrumptious ones, then you'll cherish them all the same. The items that are part of our monthly subscription boxes are never cumbersome even for a second. If you are keen on meat, you can revel in delights such as bratwurst and Weisswurst. People who appreciate sausages from Bavaria aren't able to refuse our boxes. If you want to reap the rewards of German spices and flavorings in general, then nothing can compete with our treats from Munich and elsewhere. We make dining like a bona fide Bavarian simple as pie for the members of our subscriber base.


It can be a pleasure to take in the wonders of Black Forest cake from Germany. This is a dessert that has been enchanting people the world over for a long while now. It's not going to stop doing so any time soon, either. People all over the United States adore it to bits. The same applies to people all over Europe. People adore it from the United Kingdom to Eastern Europe and beyond, and that's no exaggeration. If you subscribe to our boxes, you may just be the recipient of one of these German cakes.

Good German food genuinely runs the gamut. It doesn't involve just meat. It doesn't just involve potatoes, either. People often think of Germany as being a meat and potatoes nation. That's not untrue, either. The reality is, though, that there are many food products in Germany that have nothing to do with either of those categories. If you're in the mood for classic German potatoes, though, you can subscribe to our boxes. Why is that? It's because you may just receive a yummy kartoffelpuffer. Kartoffelpuffer, in short, describes a potato fritter. If you want to nosh on these kinds of fritters, then you won't be able to refuse a chance to subscribe to our boxes. If you've never heard the term "kartoffelpuffer," that's okay as well. People often refer to them as "reibekuchen." These delightful treats are common all over Germany. People frequently eat them in conjunction with apple sauce. It can be hard to compete with this savory and sweet mix. 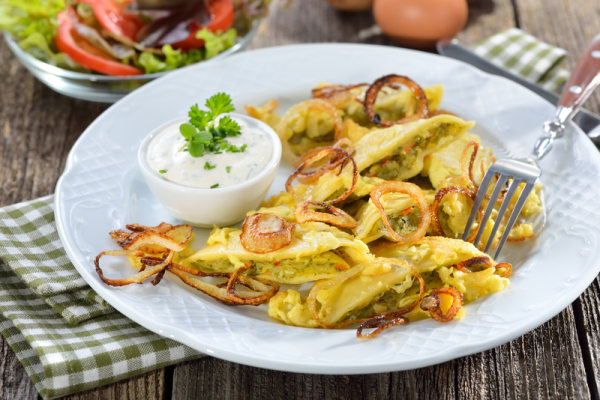 Bread is beloved in all different corners of the globe. It's beloved in Germany as well. If you're a big bread lover, then you may want to sign up for our monthly boxes. That's because we may just wow you with the addition of mixed wheat bread. How exactly do Germans refer to this kind of bread? They use the word "weizenmischbrot." It's a cognate that sounds truly and classically German. If you're enamored by baked goods, then this bread option is the way to go for you. If you're enamored by rye flour, ditto.


You don't have to restrict yourself to classic bread. People who subscribe to our monthly boxes in many cases receive stollen or just "fruit bread." Picture the most delectable bread out there. Picture adorning it with tasty and sweet pieces of fruit as well. If you do that, you can get a grasp of stollen. It's been enthralling food lovers all over Germany for ages and ages. There's nothing mysterious about the popularity of stollen, either. People who love icing sugar often snack on it. It sometimes features powdered sugar, too.


Who doesn't like honey? Most people do. Honey comes from all parts of the planet. You can find it Down Under in New Zealand. You can even easily find it in the heart of Europe in wondrous Germany. German Food Box subscribers often jump for joy when they open up our monthly subscription boxes. That's because it's not atypical for our boxes to contain Deutscher Honig or just "German honey". If you love honey like bears do, then our boxes are precisely the thing you need in your existence. This bee honey is a powerhouse for sweets lovers. It has a transparent look that's lovely yet simple. If you admire natural food items that are golden and purely German, then you won't be able to say no to our honey. You won't be able to say no to our comprehensive food subscription boxes overall.


People love pasta as much as they adore bread. People all over Germany dine on pasta practically on a daily basis. They're especially fond of a pasta that's called "spaetzle." Spaetzle is fascinating due to the fact that it's essentially a hybrid of classic pasta and timeless dumplings. If you're all about food items that are filling, then spaetzle may be appropriate for your appetite. Our subscription boxes include in-depth recipes for people who want to be able to throw together German dishes of all varieties. If you want to wow the people in your life with a magnificent spaetzle dinner, then you should subscribe with us as soon as possible. It can be hard to find recipes that are as genuine as ours are. Our recipes are and have always been quintessentially German.


If you want to accommodate a longing for sweets, there are choices in our boxes that go beyond Black Forest gateau. Although it's hard to deny the marvels of Black Forest cake, we can also dazzle you with Schaumkuesse. Schaumkuesse is a marshmallow snack that's concealed in the most delightful chocolate possible. If you want to taste something practically sinful, then these treats are the ideal choice. They're optimal for folks who adore wafers. They're just as optimal for those who adore eggwhite foam.


Signing up for monthly subscription boxes via German Food Box is never difficult or overwhelming. It never is anything that demands a substantial time commitment at all, either. If you want to eat like a bona fide Germany resident, then our boxes are exactly the thing you deserve. We switch up the items that are part of our boxes all of the time. That's the reason they never become stale to our customers. If you're fed up with subscription boxes that are anything but inspired and energizing, then you'll find ours highly accommodating. Our team members go the extra mile to pick good German food products for our many subscribers.


Who is in charge of German Food Box? Michael Pirro of the Sunshine State is. He's a German gentleman who now refers to Florida as being his place of residence. Although he's no longer living on German soil, his penchant for the European cuisine is more intense than ever. That's the reason he strives to spread the word about it to people all over the massive United States. It can be a pain for people who live in America to be able to secure German food products that are genuine. There aren't that many German eateries in America. There aren't that many grocery stores that stock German food items in the North American nation, either. That's fine, though. That's because German food admirers can now turn to the crew at German Food Box. If you secure a subscription through our site, then you don't have to go anywhere to secure German treats. That's because our package will show up at your residence. If you want to be able to take advantage of German food without having to do much at all, then nothing can come close to our online food shop.


Do you want to test out the most wonderful food items from Germany? If your answer is yes, then you need to head to our Internet boutique without a millisecond of hesitation. We can talk to you about all of the German food product possibilities that are right in front of you. Drop German Food Box a line A.S.A.P.