Enjoy A Taste Of German With This Convenient New Service


Nothing in the world is quite as comforting as a box of exotic food. While German food is very popular in Germany and many European countries, Americans are really missing out on this type of food. That's what German immigrant Michael Pirro discovered when he moved to Florida and quickly found that his beloved German cuisine wasn't readily available in his city or even in the entire state of Florida. Finding a German restaurant with authentic German food was like finding a needle in a haystack (you don't).

Unwilling to give up on his homeland's cuisine, Michael got an idea that paid off for him and for other German food lovers. He decided that the recent subscription box craze was the ideal platform for sharing his love of his native land's food. And thus, German Food Box was born. It's a lucky thing for Michael, but it's an even luckier thing for you. People have discovered that German Food Box reviews sometimes leave out the more personal nature of this story, so we wanted to make sure Michael got his big thank you for creating this food box for the entire world to appreciate.

The box itself comes in a beautifully decorated art style that gets you in the mood for serious German chow time. While design isn't everything with these boxes, it's inevitably a delightful feeling when you get your first German food box and realize that it's a decorative gift box style that really emphasizes the goodness of the food within. What's inside the box, though, is what really counts here. You'll find yourself getting an entire box full of 6-8 genuine German food items a monthly basis. Now that's something to look forward to every month!

Some folks love mystery; others appreciate specifics. We'll give you a little of both here by keeping all the food items a secret (they're specially curated just for you on a month to month basis, so even the curators don't know until they're done with their monthly curating). Here are just a few items that have appeared in the past:
Kartoffelpuffer: Scrumptious German potato fritters

Spaetzle: Described as "somewhere between pasta and dumplings," this dish is all good

Weisswurst: One of the most famous "wursts," this minced calf dish will delight just about anyone

Deutscher Honig: Any German food pro will tell you that everything on earth goes better with a little dash of German honey

Bratwurst: You didn't think they'd leave out some of the best Bratwurst you've ever had in your life did you?

This is by no means an exhaustive list of all the different types of German food you'll receive in your boxes. Since every single box is different and curated by some of the most enthusiastic German food eaters in the world, there's always a new type of flavor to explore. From meats, to sweets, all the way down to that legendary German honey, you'll have an endless forest of German food to explore. You might just get lost in it (don't trust the woman with the gumdrops on her house, though).


Give the Gift of German Food

If German food isn't your thing, we understand. Everyone has a different set of taste buds, and it could be that German food doesn't agree with yours. In that case, do you know a German food lover? Someone who salivates at the sight of a bratwurst or who'll drive 100 miles just to attend the latest German food festival? If you have one of these people in your life, it could be that German Food Box is their #1 most wanted birthday or Christmas present that they don't even know about yet. You can't ask for something if you don't know about it. Some German Food Box reviews leave out the gift aspect of this subscription box, so we wanted to make sure we emphasized how cool this is in our own German Food Box review.


The German Food Box subscription makes an ideal gift for any occasion. Every month, your loved one will receive a box piled high with authentic German delicacies. And we bet that your loved one is going to thank you until the end of time for thinking of this gift. It's that "little treat" people don't think to buy for themselves that really pulls on their heart strings (and appeases their taste buds). There are three different gift packages that you can choose from. Some folks will want to give German Food Box for just a little while to make sure their loved one enjoys it. Others will want to spring for a full year of tasty German Food. Whichever one you choose, your loved one is going to be thrilled about your thoughtful, delicious gift.

If you love German food, the biggest reason to sign up is that you're going to get some of the finest, best tasting German food in the world, specifically curated just for you and your tastes. It's surprisingly economical as well, giving you a huge amount of German food in one sitting for far less than you'd pay to go to a restaurant and order all of the same things. And the variety of food that you get is an amazing reason to sign up as well. Every food group imaginable has a place in a German Food Box throughout the year, giving you diversity and fun. 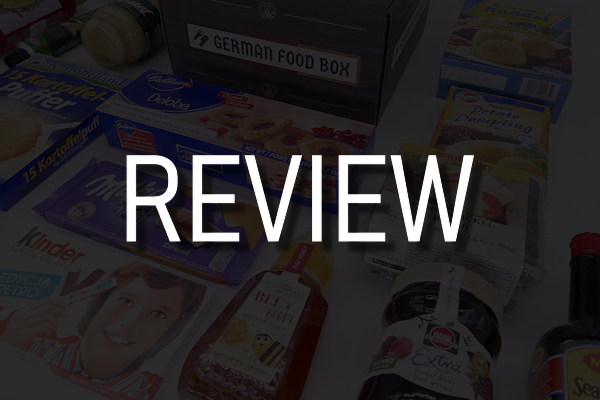 Michael Pirro made it easy for you to take advantage of the world's highest quality German food. You just sign up for German Food Box, and you're on your way. His creation has made a huge splash on the Internet, garnering positive German Food Box reviews around the globe. Our German Food Box review is but one of many positive reviews that tout the goodness of this treat. Why sign up?
It's easy to sign up

Get new German foods to try every month

It's affordable even for the frugal


Thanks for reading our German Food Box review. We hope you've developed a craving for German food right now. German Food Box reviews are overwhelmingly positive across the Internet and in your local communities. You'll find many unboxings that celebrate the goodness of this affordable treat, and then of course, in real life anyone who has tried this will mention just how good it is. We'd like to mention that again. This is the real deal. It's full of authentic German food that changes each month to give you an ongoing love affair with delicious German cuisine. You can sign up for it today in only a few minutes, and your brand new German Food Box will be on its way monthly!